Beach Coders Honored for Being Disruptive in Class 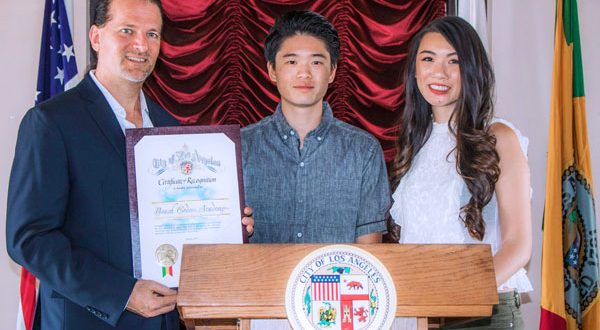 March 10, 2017, El Segundo, CA:  Normally one can expect to be sent to the principal’s office for being disruptive but in this case, the city of Los Angeles decreed February 2017 “Beach Coders Month” and presented an honorary proclamation to Beach Coders founder and faculty at LA City hall.

Beach Coders Academy has bucked the trends in the “coding boot camp” space by distilling their program down to what’s essential to entering a career in web development today. “Most coding boot camps are several months long, require an excess of sixty hours per week and come with costs approaching that of a traditional college – contrarian to the college disrupting boot camp model,” says founder and CEO, James DeCicco. “Our live class program is part time and only four weeks long yet delivers a more immersive and individualized experience than anywhere else and focuses on the most available jobs in tech today, which is Front End Web Development and User Experience Design.”

Beach Coders Academy’s El Segundo, CA location opened its doors in May of 2015 with the goal of serving the local south bay area of Los Angeles. The startup school has gone on to train hundreds of tech newbies and seasoned coders alike from as far as Spain, Thailand and Russia who travelled to the campus desiring to learn fresh, top paying skills.

“We keep class sizes very small to maximize personal engagement,” says DeCicco, “Our curriculum is constantly revised, sometimes from month to month, to keep ahead of the trends.”

Beach Coders classes are small to provide a focused and engaging experience. Book your seat now before the sessions fill up! Enroll Now!